Just a quick note from me, I will be posting solely on deathorgloryblog.blogspot.co.uk/. This is a gaming group blog set up by me and some good friends that dicusses gaming and painting check it out please.

See you o the other side. 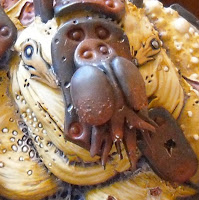 So its been a few weeks since i posted and alot has changed in the world of 40k. So how would this 5th ed Dark Mechanicus army now work in 6th? The first thing I had to consider (not being from its own codex) was do I stick with using the Necron codex? With the addition of allies there may be a better way of representing the Mechanicums dark brothers. So after about a week of thought, I decided that I would stick with Necron rules and start looking to a new theme for them to allow me to change away from what I considered to be a 5th ed list the Scarab Farm.

This process is underway but not complete as of yet. However things that will now be coming into the list will be flyers, and although 6th ed may start pushing us away from vehicles a small amount I see them playing a big part in the future of my army. There is even the possibility of some Jokearo’s making an appearance along with a mini knight titan (dread knight) as I consider including Grey Knight allies.

I thought for now I would post a gallery of some of my current models to wet the appetite for any budding dark apprentices out there.

Necron Lords with cryptex bodyguards.
(The top one a group of Nurgle influenced priests, with the second group to be more Tzeentch.) 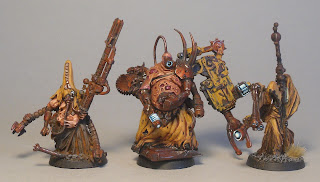 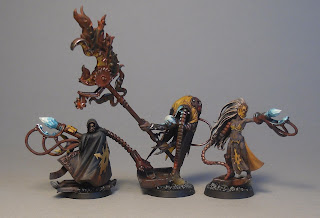 Immortals
(Trying to make them look more like industrial machines with a job to do rather than having any personality.)

Stalkers
(The first one is designed as a giant scarab, with the second a daemon corrupted machine that after years of servitude is more daemon than machine now.) 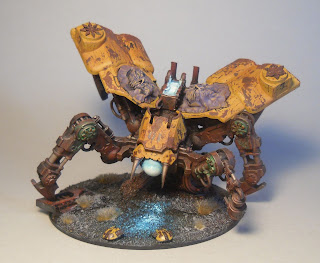 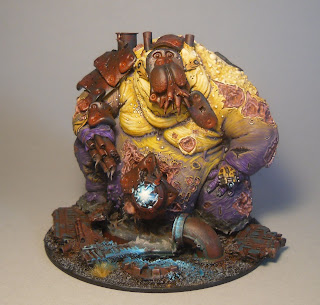 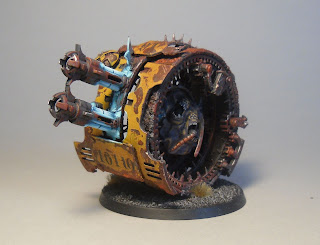 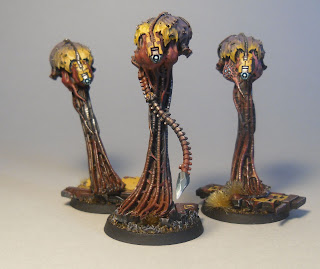 ﻿Hope you enjoyed this short look into my Dark Mechanicum army, and I will be posting any future modelling and gaming projects including Army lists and my upcoming zombie warriors and flyers.
Posted by Rich at 10:05 1 comment: 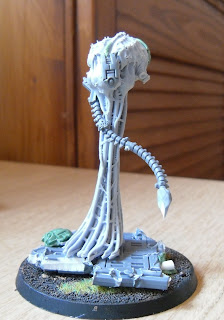 As discussed in an earlier post, scarabs rely on spyders to generate more of them if you are doing a scarab farm army. I was not sure what to do for the Spyders at first so I trawled through a load of ideas from movies such as war of the worlds until I settled on the idea of the sentinels from the matrix. So I had my plan but how to make them and keep the part daemon theme that I’m looking for.

I looked around finding allot of different options for the base part of the model but finally decided on the forge world mieotic spores. With 3 for £17 this worked out a relatively cheap, as well as giving me a base to work off of.  With a little bit of kit bashing and some greenstuff the first one with gloom prism was made. I used the main body of a scarab as the head to keep the theme working from one model to the next in the army.

With the painting I followed almost all the same steps as for The Lord of Flies.

Note: With GW bringing out the new wraiths and spyders mine look alot more like, and are sized much better as wraiths so i may need to redesign new spyders now.
Keep reading.x
Posted by Rich at 04:40 No comments: 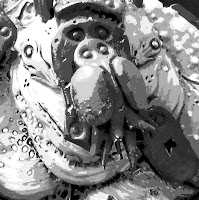 Hi all just a quick post with the new rules in mind. I have to say the excitement has hit and my mind is already thinking about what possible options the new rules will bring to my Dark Mechanicus. Several of the rumours that interest me are allies, flyers and buildings.

I have been trying to make my Dark Mechanicus fit into one codex, Necron being the one I chose as It gave allot of flexibility on modelling projects. However with this new allowance of allies, means I can try different combos to make the army both competitive and fluffy. Chaos Marines with Guard allies maybe, Guard with Daemon allies (don’t know if this will be an option but I like the sound of it), the possibilities for modelling projects will become endless.

Well we all expect flyers will play a big part in 6th ed so this will have to be a modelling project in the not so distant future. Where do I start with Mechanicus flyers? I always thought of them having big clunky machines not nimble flyers but they do like to use alien technology and daemons so watch this space!!!!

As part of the Dark Mechanicus theme I want to add a contingent of Iron Warriors these would be essentially the guys who guard the factory’s while the Dark Mechanic has his way creating a whole world of new toys for the dark gods amusement. Thematically how great would it be to see Iron Warriors with their own trench system or small fortified walls hastily constructed before a battle?

All in all I’m excited about the new rules from a gaming point of view but these are the bits that get the creative juices flowing. I will still be continuing with the Necrons for the moment but when that is wrapped up I should have a hold on the new ideas for 6th.


Thanks for reading. x

The Lord of Flies

As with all projects it has to start somewhere. This project all begun with my Forge world greater daemon that had been sitting staring at me on my shelf for several years. This model was to be the centre piece of whatever army I now started.

The Idea
I drew inspiration from allot of steam punk artwork and that combined with a few of my close gaming group looking into Warmachine I got the bug for some kind of rusty daemon model.  And so the Lord of Flies was born. I used Fimo green stuff and plasticard to sculpt up all the parts I needed for him at this stage this is what he looked like. 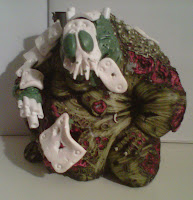 The Skin
I didn’t want him to be in the traditional greens and browns you see everywhere for Nurgle so I tried something different. I went for yellows and purples to give him a bruised appearance. I started with a white undercoat and decided on the top half being yellow with the bottom half in the purple. I base coated with (ID) Iyandan Darksun for the top and (HP) Hormagaunt Purple for the lower areas.
I then blended from the yellow to the purple through the middle of the model.  I then used this mix to shade the yellow areas adding more purple in the deepest crevasses. I then highlighted the yellow starting with (ID) and adding (GY) Golden Yellow starting with 50/50 mix and working in more golden. I then added (SW) Skull White to the mix for the very final highlights.
The mix of (ID) and (HP) worked as a great way to highlight the purple pushing it towards a brown for the highlights by adding more (ID) to the mix. I then used (LP) Liche Purple to shade the purple, now I know (LP) is a lighter colour but with purple and yellows being opposite it makes the shaded bits stronger than using a flat black in my opinion. You will note that by the small amount of colours I use I prefer to mix than to use allot of different shades bought from companies.
Colours used for the skin All GW paints
(ID) Iyandan Darksun
(HP) Hormagaunt Purple
(GY) Golden Yellow
(LP) Liche Purple
(SW) Skull White
﻿
﻿

This was going to be the most important part of the model I felt as the skin had turned out well the metal had to compliment it. To do this I needed to keep it dark but I also wanted it to be very rusty as you would expect being fixed to a puss seeping greater daemon of Nurgle. I looked at allot of photos of rust to see where it formed where the colours were strongest etc... I then had to adapt this to my own slightly cartoony painting style. Before I really started painting the metal I used a bit of the new games workshop textured paint to give a bit of a bobble to the areas without using sad where the particle are just too large.
To basecoat the metal I used an undercoat of (CB) Chaos Black, and the basecoated the metal with a 50/50 mix of (CB) and (AB) Adeptus Battle Grey. I wanted the surface to be very mat as when you look at drain covers they don’t shine; sometimes I think everything in 40k has been chrome plated.   From this point on it was all about the rust.
I started the rust with a heavy stipple of (SB) Scorched Brown on the whole area I wanted to look rusty (don’t rust the whole thing completely as you will lose some of the depth of the basecoat). I then applied a lighter stipple of a 50/50 mix of (SB) and (DF) Dark Flesh this is done towards the edges and not designed to fully cover the whole area just done. An even lighter stipple of pure (DF) is the added to random areas.
Now it’s time to get a bit creative so I water down 10/1 ratio of water and (BO) Blazing Orange and wash this over some parts of the armour. And I use a 5/1 ratio of the same mix to wash into the crevasses to leave an orange hue.
Once this has dried I apply a final stipple of (DF) and (BO) 50/50 mix.
I like to stylise the metal with a few edges picked out with (MS) Mithril Silver to show a scratch in the metal or a broken edge etc...
It is now time to do a final weather using the forge world weathering powders (AR) Aged Rust followed by (LR) Light Rust, and a dusting of matt varnish to set it.
Paints used for Metal
(CB) Chaos Black
(AB) Adeptus Battle Grey
(SB) Scorched Brown
(DF) Dark Flesh
(BO) Blazing Orange
(MS) Mithril Silver

I hope you have enjoyed reading this article, the model really was a joy to make and paint and I will have a few studio shots of him coming up in the not too distant future.

Thanks for reading x
Posted by Rich at 04:10 No comments: